2020 is an outstanding year in every respect. Despite current events turning the world upside-down, it is also the anniversary of a number of historic events that changed the world and people’s lives: 30 years of German reunification, 45 years of diplomatic relations between the Federal Republic of Germany (former West Germany) and Vietnam, 40 years of the contract worker agreement between the GDR (former East Germany) and Vietnam.

These events have put flows of migration in motion that continue up until today, though with new generations in new shapes. This article looks at Vietnamese-German migration history, embedded in a biography. It shows how 1990 with its context of 1975 and 1980 was a year of change not only for Germans but also for Vietnamese residing in Germany at that time and has shaped transnational (hi)stories ever since.

My name is Ngân, I was born in January 1990 as a child of two Vietnamese contract workers. My father came to Czechoslovakia in 1982 to work in a paint factory in the industrial town Pardubice. My mother arrived 1986 in the same city, she was employed by a textile factory. My father had integrated relatively fast, he learned the Czech language and became an important aid for his coworkers and bosses. He also helped other Vietnamese to settle in the foreign environment. End of the 1980s my parents met and fell in love. When my mother got pregnant with me, trouble started. Contract workers were not allowed to get pregnant during their stay. Thanks to the amicable support of a Czech doctor, my mother was not forced to terminate the pregnancy but allowed to stay in Pardubice. He attested my mother that she was unable to travel due to her circumstances. In the meantime, the peaceful revolution had changed the political conditions in Eastern Europe. The conditions for the contract workers changed step by step, the right to remain was implemented in a stricter manner. Finally, my family left the new Czech Republic to escape deportation. It was a very difficult situation for my parents. They got used to life in Europe and did not have any grounds on which they could return to Vietnam. During those times, Germany offered a bit better conditions for migration. They tried their luck and, after a lot of detours, reached the home for asylum seekers at Rheinstrasse 61 in Falkensee by Berlin. 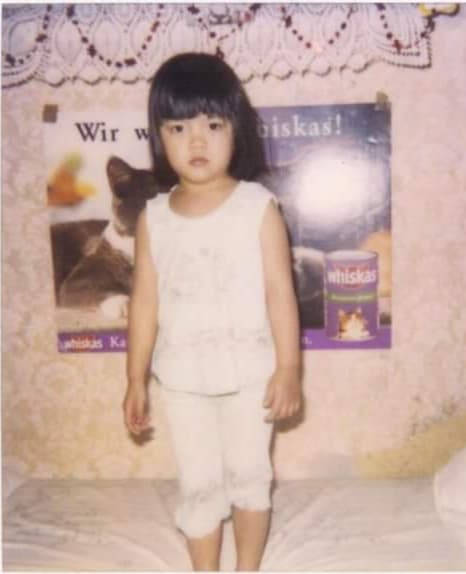 At the time of what would be called German reunification, around 60,000 contract workers lived in East Germany (Dennis 2007). They came from other countries of Socialist Brotherhood, mostly from Angola, Mozambique and Vietnam. The concept of contract workers was supposed to be a triple win in its conception, not only in Germany, but also other Socialist receiving countries: The sending countries would – or should – be able to educate and qualify their workers and have less people to feed in times of war and hardship. Upon returning to their home countries, they would be able to return with acquired skills and expertise and, while they were away, send much needed industrial goods and some financial aid. Since its inception the GDR and other Eastern European countries were struggling with a lack of laborers, especially for low-skilled jobs. Many East Germans had escaped to West Germany. A fate they shared with the Vietnamese who moved to West-Berlin in great numbers in early 1990. So workers were needed in order to implement the economic 5-years plan – an agreement between the GDR and Vietnam was soon signed. 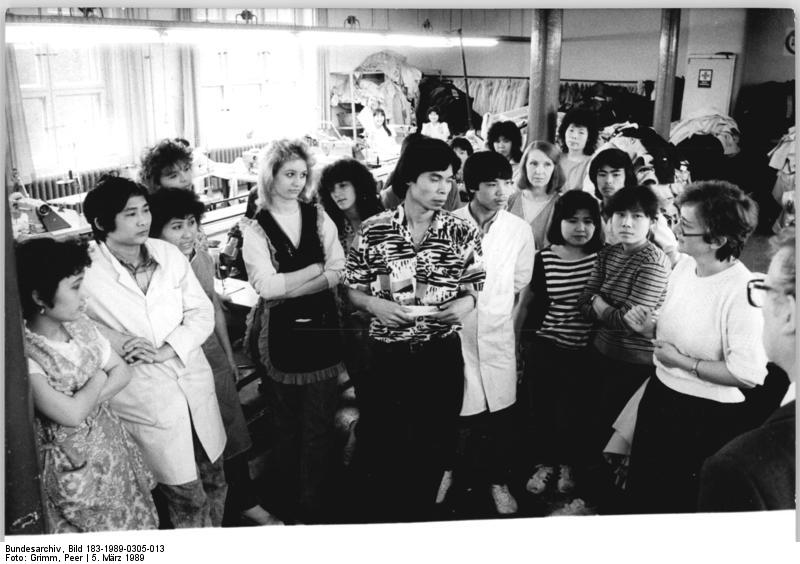 The limited existing research on contract workers’ lives found that that there were two main pull-factors for contract worker migration – improving the economic situation of owns family and traveling. At that time, economic opportunities in Vietnam were still limited and hunger and poverty still wide-spread, although things started to change from the second half of the 1980s on. Traveling abroad was also an adventure for some and prestigious, as not everyone was allowed to take part in. Some female contract workers report that it was a chance for them to see something new and at the same time escape conventional family roles that would have demanded early marriage from them.

Looking back, many contract workers glorify their time in the GDR, not to mention the hard regulations contract workers had to comply wit. For example, contract workers were only entitled to a living space of 5m2. Women were not allowed to give birth during the time of their contract. If they got pregnant, they had to choose between deportation or abortion. Additionally, racism, although denied by the GDR government, was already a problem back then. This ranged from micro-aggression such as German co-workers making fun of Vietnamese food to actual violence connected to the rise of skinhead culture.

Then came 1990 and the big uncertainty. No one could answer questions on what would happen to the contract workers staying in the country. Many left and accepted the paid return back to Vietnam. Some moved between former receiving countries – from Germany to Czechoslovakia or vice versa. Some had made Germany their home and wanted to stay. Legal requirements were unclear and remained so until 1997. Only then a definite regulation was negotiated by German politics. In the meantime, the former Vietnamese contract workers negotiated their daily lives in a grey zone and with the help of self-employment.

Here I then spent the first half of my childhood. I still cherish happy memories from our lives in the asylum home – in the beginning it was a normal home for me. Only later I understood that lives were dependent on the toleration by German authorities. My parents tried, as much as was allowed to them, to provide a comfortable life for us by taking up smaller jobs. On top of that, we were lucky to have a lot of support by our German friends and neighbors. Because my parents were not allowed to study or take up regular employment, it was impossible for them to build a steady and safe basis for our lives. They got stuck in the asylum seeker status. At the end of the 1990es, the asylum home in Falkensee was supposed to close and be reallocated to different usage. All residents were thoroughly screened. Even the fact that I had three younger siblings by now, who were all born in Germany, did not matter in the final decision. In 2001 we had to leave Germany – at first my father, me and my two sisters, six months later my mother and my brother followed. We were able to live with relatives in Hanoi upon our return.

Of the remaining contract workers, some were able to convince their families back in Vietnam to follow them. Many of those had not met in years and communication was still rare at a time without much internet and smart phones. Others had met their partners while in Germany, both Vietnamese and German, and decided to stay on and call Germany a home for their future children. Some were forced to return to Vietnam. Those who were able to stay, brought up their families in Germany, the so-called 1 ½ generation of Viet-Germans (still born in Vietnam but migrated to Germany at a young age) and the 2nd and 3rd generation of Viet-Germans. They face very different challenges to their parents’ generation. As diverse as this diasporic group is, many share challenges inside and outside of their families. There is a constant negotiation process between expectations from their parents and German society. Growing up with two cultures is a treasure but it also is a burden. Finding ones own identity between often-traumatic biographies of families that demand children make up for it by being successful and obedient to parent’s wishes clashes with a German environment at school, with friends. On top of this tension of expectations, Viet-Germans have to deal with the day-to-day racism and stereotypes from the German mainstream White society. Self-identifying as German, questions like “Where do you really come from?”, “Why do you speak German so well?” are excluding many from a group they are actually belonging to. Viet-German identities are a hard negotiation process and a battle on multiple fronts at the same time. Yet these struggles are often unheard as they are covered by the stereotype of “exemplary migrants” which claims Viet-Germans for their success in the education sector and forgets to mention the hardship that is behind it. The “cigarette mafia” is now the “model minority” but nevertheless still faces violent attacks as before. Also, for the ones who had returned to Vietnam, the German education and experience could not simply be switched off but continued to inform lives among two worlds.

The first weeks were very chaotic and adventurous, as I spoke German fluently but hardly my mother tongue Vietnamese. I had to catch up with my language skills really quickly. I did well and soon I was able to continue school. 2009 I began my studies in Finances and Banking in Hanoi. All these years I kept remembering my early childhood in Germany and tried to stay in touch with friends. In my heart, Germany always kind of remained a place where I longed to be. To keep up with German culture, I worked as a tourist guide for German tourists in Hanoi. Finally, my wish became stronger and stronger to return to Germany. In 2015 I got the chance to move back as Au-Pair. I lived with a family in Wetzlar and took care of their children. Quickly I managed to refresh my German skills and prepared for a vocational training in Germany the following year. Suddenly, I saw myself in the same situation as my parents 15 years ago and this time I wanted to do everything right. I decided for a profession with good future prospects. I put a lot of hard work into everything you need to know for geriatric care. I passed my exams and graduated in 2019 as a state-examined geriatric nurse. I live in Berlin, I love my job and enjoy my life – I am confident and excited about my future. 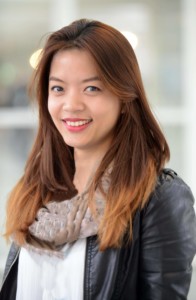 There is GDR no more so as the contract workers. But there is a new form between Germany and Vietnam that is again based on recruiting Vietnamese labour for jobs that the Germans do not want to do because of the bad conditions of these jobs. This time, it is the care industry. The Goethe Institut has as one of its tasks to teach German in countries abroad. The Goethe Institut in Vietnam has the biggest language education department worldwide. The demand to move to Germany is unbroken, historic ties remain strong and young Vietnamese seek to continue family traditions of looking for new chances in Germany. Meanwhile, the German government looks likely to repeat old mistakes: the German ministry for Economics explicitly says that migration is supposed to be temporary, no long-term residence is allowed and therefore integration and inclusion not high in the priority list. Instead of listening to stories from former contract workers and taking their experience into account, history looks like it will repeat itself with a new generation. Or can we use the anniversaries to actually rethink policies and how to make migration less discriminatory?

This is one of many articles that was submitted to our „Call for Contributions“ that couldn’t be printed due to the limited capacity of our latest publication „Ist Zuhause da, wo die Sternfrüchte süß sind? Viet-deutsche Lebensrealitäten im Wandel“. We are happy to share it here. We will be posting 3 more articles in the following weeks of December.
This text was first published on: th.boell.org

Thi Thuy Ngan Nguyen lives in Germany since 2015 and learned the German language during her time as an au pair. She completed her training as a nursing professional with a specialization in geriatric care in 2019 and has since then been working in the „Center for Respiration and Intensive Care“ in Berlin.